New for Halloween 2018—and available anytime!

Professor Jay Tee has created three new, terrifying Adventures in hypnosis. These shows were NOT created for the faint-of-heart! 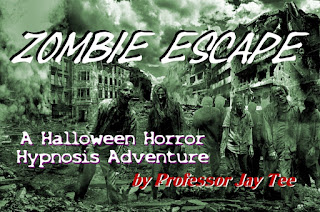 The End of the World has come, just a little sooner than you expected.
The dead have been rising and killing for days, and now their own victims have begun rising as well. But how do you kill the already dead?
Can you learn to defend your final stronghold against the powerful zombie onslaught? 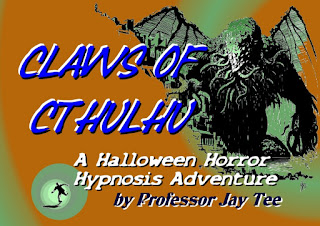 The stars have aligned themselves perfectly as a precursor for the return of Mankind's final Doom.
Earthquakes have already destroyed whole cities and killed millions, huge tsunamis swept beaches clear of life, and long-dead volcanoes returned to fiery life, belching noxious gases worldwide.
Sensing their time is near, deluded cultists have gathered near you to perform the final ritual magics.
They intend to open the Great Door at the bottom of the sea, and release the evil god Cthulhu; to finish the destruction of our pitiful little human race...
Can you stop them? But it was only done in fun! That won't stop the evil spirits and the demons from taking advantage of your foolishness. Ouija boards and seances are powerful tools of evil...
And now, if you don't all work together, and take quick, decisive action, many more people will soon go over to the "other side."
Most certainly including everyone you love in the world...

These three are new titles in our Themed Hypnosis™ line.

Book now, get a quote, or ask for more information by contacting our office at professorjaytee@superunconsicous.com. 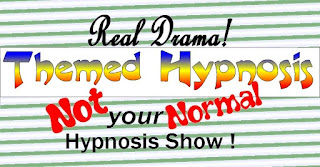