If there's a first time for everything... today was my first time!


Glenn Lacerda was your typical account executive, working for a medium-sized company in Ohio. Glenn had a typical American family... a caring wife, and a boy and girl, in middle- and high-school, respectively. He had the usual collection of bills, and he grumbled about recent politics like everyone else.

In fact, Glenn was typical, except in one small personal detail that he took careful effort to avoid revealing to anyone. He worried that, if other people knew his secret weakness, the knowledge would damage his business relationships, mark him to be a "weirdo" socially, cause his family to be ostracized, and lead him into a life of shame.

Even Glenn's wife didn't know the truth; Glenn feared what she would say and do, after trusting in his strength and confiding her secrets to him for nearly two decades.

The numbers are impressive, but they don't help you to change. Over 25% of Americans share Glenn's weakness to some degree, and some 20 Million people have it just as bad as he did. It's a debilitating problem, one with a negative impact on every aspect of your life: business, social, financial, and personal.

You see, Glenn Lacerda had never taken an airplane flight in his life. He couldn't. He was terrified of airplanes, and would get images of crashes and death in his mind's eye every time he thought about it. But today, his life was going to change for the better, thanks to the "Joy of Flying" a new Master Quality Audio Hypnosis program by Professor Jay Tee, the "21st Century Hypnotist."

Following the Professor's instructions, Glenn had been listening to the audio hypnosis CD for several weeks, every night just before bedtime. This Tuesday morning, he was at Cincinatti airport, tugging a small suitcase behind him. His flight to Chicago would leave in about ten minutes.

"I've been driving five hours each way for years; every time I had to visit a corporate client in the Windy City," Glenn said. "That was either a tremendously long day for me, or I had to pay for my hotel. My company wouldn't pay it; in fact, they had no idea about my difficulty, because I just told them I liked the drive."

Glenn's trip took less than an hour and a half each way, today. And Glenn's company paid for the tickets. "I still can't believe I'll be home before 7:00 tonight, eating dinner with my kids," Glenn wondered aloud, meeting us in Cincinatti on his return. "Wow. All that time I used to waste on the road."

"I never realized just how easy it was going to be," Glenn said. "When I think about how I felt... I actually enjoyed going on the flights! Even when the first flight got a little shaky for a bit, I knew we'd be okay. I helped some parents calm down their little girl, who was sitting near me. I distracted her by suggesting colors for her crayon drawing. It felt good to be seen as strong. mentally as well as physically."

"I'd really recommend it for people like me," Glenn said. "It worked like a charm to take away my worries. Maybe it worked too well! I totally forgot I'd be flying home today, so I packed my razor and toothbrush as usual, and carried them both ways! At least I didn't pack more clothes." 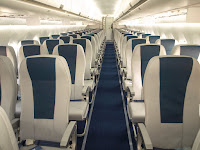 If you get the jitters just thinking about getting on board an airplane. try Professor Jay Tee's "Joy of Flying" for yourself, and join the hundreds of people who have already learned to improve their life by taking to the skies.

Got another issue to work on? Other Master Quality Audio Hypnosis titles are already available, and more are on the way each month.
- May 04, 2017
Email ThisBlogThis!Share to TwitterShare to FacebookShare to Pinterest
Newer Post Older Post Home